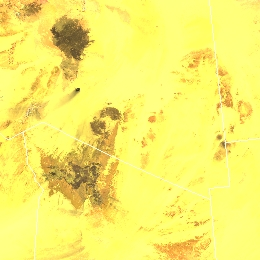 In the figures below, the Cloud Phase RGB is presented together with the Natural Colour RGB to help identifying the surface features.

Figure 1 shows the part of the Sahara with the Sinai Peninsula. The Sahara Desert appears mostly yellow, while the vegetated area (e.g. along the Nile River and the delta of the Nile) appears dark/medium brown in the Cloud Phase RGB.

In the Natural Colour RGB (right image), the Sahara shows a special structure: sandy desert appears pinkish red, other areas (rocky or mixed desert) appear brownish or grey. On the Cloud Phase RGB one can see almost the same structure. Sandy desert appears yellow, while rocky or sand mixed with stones appear darker with some brownish or reddish shades. However, the Cloud Phase RGB shows less details than the Natural Colour RGB. The reason for this is that the Cloud Phase RGB is tuned for highlighting cloud top microphysical features and not for surface features. The red and the green beam of the Cloud Phase RGB are cut at 50% reflectivity values, (see the recipe on the left) resulting colour saturation for some areas of the desert and hence omitting surface details.

Figure 2 below shows the north-western coast of the Black Sea in June and August. The ‘Oleshky Sands’ national park is located close to the River Dnieper (indicated by a white arrow). It consists of sand dunes with sparse vegetation across the sands. In the Cloud Phase RGB, the desert appears yellow with some brownish shades in June and August (slightly more brownish shades in June than in August). Note that a salt lake is also seen (indicated by a blue arrow). 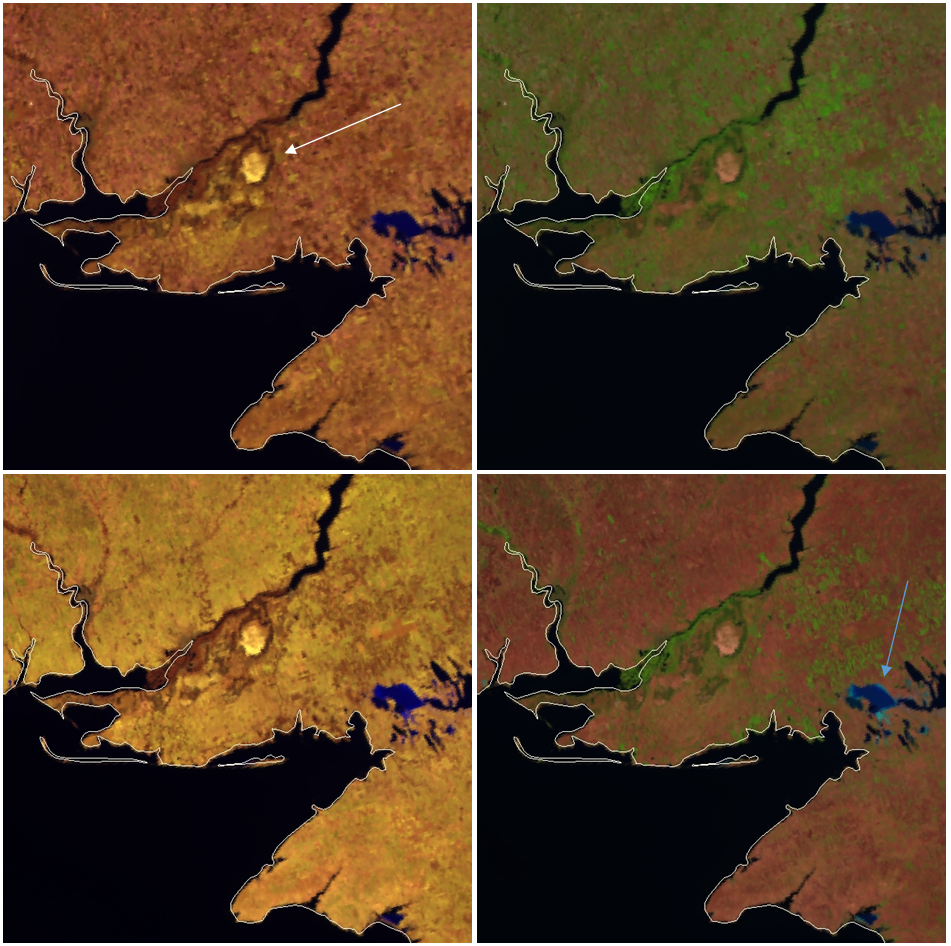 The figure below shows Anatolia. The Anatolian highland is a large semi-dry area. It is covered mainly by steppe. Some parts are semi-desert. Dry grasslands cover the drier valleys and surround the saline lakes. In the Cloud Phase RGB the inner part of Anatolia appears mainly light brownish, close to yellow. The coast of the biggest saline lake (Lake Tuz) appears yellow. The saline lake appears dark blue/magenta in the Cloud Phase RGB, while cyan in the Natural Colour RGB.

Note:
• Land is seen only in cloud-free areas.
• The colour shades depend on the solar and satellite viewing angles as well.
• The colour shades of deserts or semi-deserts depend on their typical soil type (sand or rock, depending also on the material of the rock) and the type, fraction and greenness of the possible sparse vegetation.
• The Cloud Phase RGB is tuned for cloud top microphysical analyses. Land is just the background in these images. In case of land analyses other RGB types are recommended to use, e.g. Natural Colour or True Colour RGB.
o Different desert surface types might look similar in these images due to colour saturation, appearing homogeneously yellow.
o From the Cloud Phase RGB colour one cannot say unambiguously whether an area contains some green vegetation or just bare soil, rocks. They all may appear in lighter shades of brown.